The reds down under are revolting 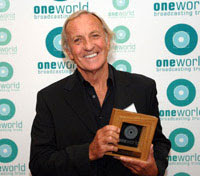 In his latest column for the New Statesman, John Pilger describes a personal loss as the quality of Australia's once distinguished wine declines - a lesson for others as the greed of "cash cropping" threatens a nation's food supply.

My parents grew up in the mining town of Kurri Kurri in the Hunter Valley of New South Wales. The main street had hitching posts and was as wide as a paddock, and the general store was shaded by a vast awning of corrugated iron and offered liquorice and slippers side by side. The mines were among the most dangerous in the world, with almost vertical shafts, and were worked according to nationality: a pit for the Scots, one for the Welsh, another for Australian-born. There was a brass band and a pipe band, a WEA (Workers’Educational Association), a School of Arts and an annual eisteddfod run by my grandfather, a German seafarer. And there was wine.

The Hunter Valley was an extraordinary landscape of mines and vines: of pyramids of coal and slag, beyond which lay long green fingers of ripening grapes. My father left school at 14 and while he waited a year to go down the pit he went to work at Lindemans vineyard, now world famous, where he would bet young Ebenezer Mitchell he could beat him at tying down four acres of vines in a single day.

This is not to suggest that a bottle of “claret”, as all Australian red wine was then called, stood on the family table as I grew up. Beer in long-necked bottles was the national drink, and only the Belgians, I once read, drank more per head: a remarkable feat when you consider that Australians consumed most of theirs in the hour, or less, before the pubs closed at six o’clock.

I drank my first glass of red wine at La Veneziana restaurant in Sydney, then renowned for its clientele of journos, musos, refos (foreigners), unrequited artistes and women. The wine came with a sticking plaster as a label on which was written, in ball point, “red”. It was not highly regarded by those who said they knew about such things, but it launched me on a love affair with the red wine of my country which continued long after I sailed away. In my early days in London, I would yearn for the “sweaty saddle” of a great Coonawarra red from South Australia; and on my trips home, my father would greet me with a Draytons cabernet he had been keeping. He had grown up with the Drayton family in the Hunter. “It’s better than honest,” he would understate its fineness as we downed it.

Australia went on to conquer the world’s biggest wine markets, toppling even the French in Britain and the United States. Last year, Australia exported 62 per cent of its wine. The average for France is 40 per cent. Foster’s, the beer goliath, is now the world’s second biggest wine producer. Tesco, Sainsbury’s and the other British supermarket chains sell labels like Hardys and Rosemount for less than you can buy them in Australia. Along with under-cutting and marketing, the whispered secret is high alcohol. In recent years, the alcohol content of Australian reds has leapt two and even three per cent. Australian Shiraz (the Syrah grape) has soared above 15 per cent. Pour this into a large glass, as many restaurants do, and you are soon on your ear. The deceitful euphemism is “full-bodied”. In his astute New Statesman column (Grapes of Wrath, 13 November 2008), Roger Scruton noted that “to force Syrah up to an alcoholic content of 14 per cent or more, tricking it into early maturation, so as to put the result on the market with all its liquorice flavours unsubdued, puffing out its dragon breath like an old lecher leaning sideways to put a hairy hand on your knee, is to slander a grape that, properly treated, is the most slow and civilised of seducers”.

So this is a lament for civilised seducers. It is also a tale of how we allow ourselves to be mistreated with industrial versions of good things, like wine and food. The world’s fastest bottling plant is run by Casella Wines in New South Wales. Casella Wines invented a brand called Yellow Tail which has the tail of a kangaroo on the label. It is “sunshine in a bottle”. Inexplicably promoted by the grand American wine critic Robert Parker, this industrial plonk swept the US market. Yellow Tail is produced in Australia’s endangered food bowl, guzzling precious irrigated water from the basin of the Murray and Darling rivers, both of which are dying as global warming creates environmental havoc in the earth’s driest continent. The recent bush fires demonstrated this savagely.

The shortage of water is so serious that the nation’s basic food supply is threatened. Homegrown fruit such as oranges have vanished from many shops. The commercial success of Yellow tail and other vapid factory wines has seen off not only the delicious flavours and distinct variety of so much Australian red wine, but is a striking illustration of the greed and destructiveness of “global” cash cropping: a sacred ideology until Wall Street crashed. We need a Felicity Lawrence to expose cleverly-branded, essentially lousy wine as she has exposed cleverly-branded, essentially lousy food.

The good news is that people are beginning to drink less of the stuff. According to the Financial Times, the “Yellow Tail Effect” is one of the factors causing bulk Australian wine exports to Britain and the US to drop by as much as 23 per cent last year. Bruce March, chief winemaker of a winery north of Canberra, says that following the success of “sunshine in a bottle” in Britain, he was advised by marketing people to sell into China at the lowest possible price and to think about quality later. (He declined). “They told us,” he said, “don’t worry, the Chinese don’t know what they’re drinking.”
Publicada por Blue Woman à(s) 04:53