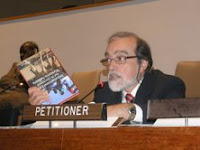 I wish to thank you for the opportunity to speak before this Committee on behalf of the International Platform of Jurists for East Timor; an NGO made up of 650 law professors, judges, attorneys and other jurists from more than 80 countries. I also would like to speak on behalf of the Stichting Zelfbeschikking West-Sahara; an association established under Dutch law for the defense of the right to self-determination of the people of Western Sahara.

Mr. Chairman,
The Second International Decade for the Eradication of Colonialism is coming to an end, and the question of Western Sahara is yet not solved. Morocco continues to defy Security Council and General Assembly Resolutions and goes on violating international law with total impunity.
As we all know, international law is very clear on this matter. The obligation not to obstruct the right of a colonized people to self-determination has the status of jus cogens, a peremptory norm of international law. Prohibition of the use of aggressive armed force is also a norm of jus cogens. As it is a norm of jus cogens the obligation of states to refrain from torture and other cruel treatment. Morocco violated all these norms and that was unanimously concluded by the writers of this book: “International Law and the Question of Western Sahara” that was published some months ago. Professors Roger Clark of USA, Lauri Hannikainen from Finland, Marcel Brus, from the Netherlands, Pal Wrange from Sweden, Jaume-Saura-Estapa from Spain and Christine Chinkin from the United Kingdom are authors from different countries and have different backgrounds, but they have two things in common: they are all respected scholars and they all conclude that the occupation of Western Sahara and the exploitation of its natural resources are unlawful, and that a free and fair referendum in Western Sahara according to the original UN/OAU Peace Plan is the only legal and real solution for the problem.

Morocco, under Hassan II, has obliged itself to accept the referendum, first by subscribing to the Peace Plan, later by signing the Houston agreements. Morocco of Mohammed VI refuses it now and that constitutes one more violation of international law, the violation of the rule pacta sunt servanda. Morocco’s bad faith is shown by a blatant contradiction: a referendum of self-determination, according to Rabat, would not be possible due to the difficulties in ascertaining the voters. However, in the case of a referendum on autonomy as the only option, there are no difficulties at all…

The Moroccan regime tries to depict the Saharawi struggle for self-determination as something illegal and even sometimes calling it terrorism. This ridiculous accusation is at odds with the fact that the past armed resistance to Moroccan aggression was lawful self-defense. In addition, the Saharawis have scrupulously adhered to the cease-fire adopted in 1991, even if that cease-fire was part of the plan that included the referendum that never took place.

Some of the petitioners in favor of the Moroccan position have proposed yesterday the establishment of ad hoc tribunals to address crimes committed. Let us begin with an inquiry into the crimes committed in occupied territory. In this respect I would like to remind this committee that Morocco and some of its supporters within the Security Council are against the publication of the 2006 Report of the High Commission for Human Rights, which of course is devastating for Morocco's position and role in the conflict. The report makes a clear link between the denial of the right to self-determination and the ensuing human rights violations in the territory. The Moroccan suggestion to establish an ad hoc tribunal is clearly a bluff given their obstruction to the publication of this report and the extension of MINURSO's mandate to observe human rights violations.

I just came back from a conference on Western Sahara that took place in Seville in Spain organized by the municipality of that town. The conference closed with a strong statement from which I would like to mention two important points. The first, it denounced the complicity of the government of Spain with Morocco in maintaining the occupation of Western Sahara and the exploitation of its natural resources, and the second was calling for the recognition of the Saharawi Arab Democratic Republic.

Indeed, Mr. Chairman, the UN continues to rightfully consider Spain as the de jure Administering Power of Western Sahara, even though Spain has tried to transfer its responsibilities by illegally giving control of the territory to Morocco and Mauritania through their infamous tripartite agreement of 1975. Now, for Spain to effectively give up its position of being the Administering Power in a completely legal way, it has to recognize the Saharawi Republic.

I started this petition by reminding that the Second International Decade for the Eradication of Colonialism was coming to an end. If this Committee, or other UN organs, would endorse the absurd statement of the former Special Representative, Mr. Van Walsum, that international law was at the side of the Saharawis, but “political realities” (read realpolitik) should prevail, what would be the significance of the Second Decade, what would be the significance of this Committee? I cannot imagine that such will happen.

Ambassador Frank Ruddy, the former Deputy Chairman of MINURSO, wrote the following in the preface of our book: “After the September 11 terrorist attacks in New York, people all over the world said: ‘We are all New Yorkers now’. Ideally, as people learn more about the Saharawi cause (…) we might someday hear: ‘We are all Saharawis now’”

The wall of silence around this illegal occupation starts to brake and the wall of shame that divides the Saharawi people will certainly follow. As in the cases of Eritrea, Namibia, South Africa and East Timor, international law will inevitably win from realpolitik.