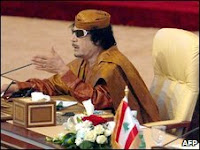 It’s Arab League summit in Doha, and the Qatari Emir is just finishing his opening address when - khhzzzrrk, Brother Leader Qadhafi grabs the mike. As the assembled stare in wonder, he goes off on a long garbled rant (video) accusing the king of Saudi Arabia of being a British-American puppet on his way to the grave, as a belated follow-up to a public spat they had six years ago. Then in the next second he changes his mind and declares that, well, that’s all in the past and he’s now ready to make up. During the whole monologue, the Qatari chairman can be heard chirping in the background: “Oh, Brother Mouammar? Brother Mouammar! Brother Mouammar, a point of order please? A point of order!”

Since Brother Mouammar clearly isn’t listening, the organizers resort to cutting his mike instead. Qadhafi angrily remarks that this is no way to treat the foremost Arab leader, the King of Kings of Africa and Imam of the Muslims; he then storms out of the meeting, and apparently somehow ends up spending his afternoon at the Islamic Art Museum of Qatar. All in a good day’s work.

People sometimes ask, is Qadhafi crazy or is he just acting? There’s something to be said for the theory that he is playing up his eccentricity for political purposes — that he must be, considering how long he’s been in power and how much influence he still has in the neighbourhood. But moments such as these lead me to believe that, granting a certain ruthless instinct of self-preservation, he’s just mad as a hatter.
Publicada por Blue Woman à(s) 05:36