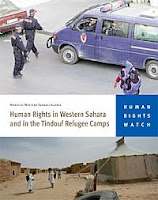 The repression has eased somewhat, and today dissidents are testing the red lines. But Moroccan authorities - to their credit - ask us to judge them not against their own past record, but against their international human rights engagements. By that standard, they have a long way to go.

(Rabat, December 19, 2008) - Morocco violates the rights to expression, association, and assembly in Western Sahara, Human Rights Watch said in a new report issued today, revealing stark limits to the progress that Morocco has made in protecting human rights overall. Human rights conditions have also improved in the Sahrawi refugee camps managed by the Polisario Front in Algeria, although the Polisario marginalizes those who directly oppose its leadership.

Human Rights Watch called on both Morocco and Polisario to take specific steps to improve the human rights situation in the territories under their de facto control, and on the United Nations Security Council to ensure regular human rights monitoring in both Western Sahara and Tindouf.

"The repression has eased somewhat, and today dissidents are testing the red lines," said Sarah Leah Whitson, Middle East and North Africa director at Human Rights Watch. "But Moroccan authorities - to their credit - ask us to judge them not against their own past record, but against their international human rights engagements. By that standard, they have a long way to go."

The 216-page report, "Human Rights in Western Sahara and in the Tindouf Refugee Camps," focuses on the present-day situation rather than on past abuses. Human Rights Watch documents how Morocco uses a combination of repressive laws, police violence, and unfair trials to punish Sahrawis who advocate peacefully in favor of independence or full self-determination for the disputed Western Sahara.

"The Western Sahara is an international problem that has been on the back burner for decades," said Whitson. "But through this conflict, the world can also understand and address the broader human rights challenges that remain for Morocco."

In Western Sahara, Moroccan authorities consider all opposition to their rule of the disputed territory as illegal attacks on Morocco's "territorial integrity," and use this as a basis to ban or disperse peaceful demonstrations and to deny legal recognition to human rights organizations. The problem goes well beyond repressive laws, however: police beat peaceful pro-independence demonstrators and sometimes torture persons in their custody, Human Rights Watch said. Citizens file formal complaints about police abuse that the justice system routinely dismisses without conducting serious investigations, reinforcing a climate of impunity for the police.

While Sahrawi demonstrations sometimes involve acts of protester violence that Moroccan authorities have a responsibility to prevent and punish, this cannot justify blanket bans on peaceful assemblies. Moroccan courts have convicted Sahrawi human rights activists of inciting or participating in violence based on dubious evidence, in trials that were patently unfair.

In preparing this report, Human Rights Watch interviewed scores of people living in Western Sahara as well as present and former residents of the Tindouf refugee camps. Both Moroccan and Polisario authorities received the Human Rights Watch delegation, imposed no significant obstacles on its work, and provided extensive answers to questions from Human Rights Watch that are reflected in the report.

In the Tindouf refugee camps, the Polisario Front allows refugees to criticize its management of daily affairs, but effectively marginalizes those who directly oppose its leadership. Residents are able to leave the camps if they wish to, including to resettle in Moroccan-controlled Western Sahara. The fact that most take the main road to Mauritania rather than a clandestine route shows their confidence in being allowed to travel. Yet, those headed to Western Sahara tend to hide their plans, fearing both official obstacles and the disapproval of other camp residents if their final destination becomes known.

The population of the camps remains vulnerable to abuses due to the camps' isolated location, the lack of any regular independent human rights monitoring and reporting, and Algeria's claim that the Polisario, rather than Algeria itself, is responsible for protecting the human rights of the camps' residents.

"The refugees in Tindouf have, for more than 30 years, lived in exile from their homeland, governed by a liberation movement in an environment that is physically harsh and isolated," said Whitson. "Regardless of the current state of affairs, both the Polisario and the host country, Algeria, have responsibilities to ensure that the rights of these vulnerable refugees are protected."

Human Rights Watch said that the UN Security Council should ensure that the UN presence in the region includes regular human rights monitoring. Virtually all UN peacekeeping missions around the world include a human rights component and, with MINURSO forces operating in a peacekeeper capacity in Western Sahara, this region should be no exception. In this, France and the United States, as the permanent Security Council members with the strongest interests in this region, have a critical role to play.

Among its many recommendations, Human Rights Watch urges Morocco to:

* Revise or abolish laws that criminalize speech and political or associative activities deemed affronts to Morocco's "territorial integrity" and that are used to suppress nonviolent advocacy in favor of Sahrawi political rights;

* End impunity for police abuses by ensuring serious investigations into civilian complaints and, where warranted, charges or disciplinary measures against abusive agents;

* Ensure that courts reach verdicts based on the impartial weighing of all relevant evidence. Judges and prosecutors should give effect to suspects' right under Moroccan law to demand medical examinations, and reject as evidence any statement that is established to have been made as a result of police torture.

* Take pro-active measures so that all camp residents know that they are free to leave the camps, including to settle in Moroccan-controlled Western Sahara;

* Ensure that camp residents are free to challenge peacefully the leadership of the Polisario Front and to advocate options for Western Sahara other than independence; and

* Eliminate or restrict broadly worded articles of the Polisario penal code that, for example, criminalize the printing of publications or participating in demonstrations deemed "likely to disturb the public order."

Morocco has ruled Western Sahara de facto since its troops moved in following Spain's withdrawal from its former colony in 1976. Morocco officially refers to the region as its "southern provinces," but the United Nations does not recognize Moroccan sovereignty.

Morocco opposed as unworkable a UN-brokered plan for a referendum on the territory's future and has proposed autonomy for the Sahara under Moroccan sovereignty. Morocco has made clear, however, that the plan envisages no rollback of laws criminalizing "attacks on territorial integrity." Thus, Moroccan-granted autonomy will not give Sahrawis their right to demand independence or a referendum to decide the region's future.

"Sahrawis differ on how to resolve the conflict," said Whitson. "But wherever they live, authorities must allow them peacefully to express and act on behalf of those views. Any proposed solution for the Western Sahara that does not guarantee these rights is no solution at all."

Human Rights Watch takes no position on the issue of independence for Western Sahara or on Morocco's proposal for regional autonomy.
Publicada por Blue Woman à(s) 05:31